The 2019 MLB Free Agent class was sure to be one to remember with stars such as Bryce Harper, Manny Machado, Josh Donaldson and others up for sale to the highest bidder. For the past few years, it was prophesied by baseball fans that 2019 would be the year that we see a half-billion dollars given to a superstar player, and we almost saw it with the new extension for Mike Trout.

If there is any player in the game of baseball where nearly $36 million dollars per year, fully guaranteed until 2031, it is Mike Trout; Rookie of the Year, seven-time All-Star, six-time Silver Slugger, two-time MVP and in six of his seven seasons the highest WAR of any position player in the league.

It is worth noting the coincidental timing of this contract extension. Superstar Rockies third baseman Nolan Arenado signed an eight-year, $260 million dollar extension in February. Shortstop Manny Machado signed with the San Diego Padres for 10 years/$300 million in March, while outfielder Bryce Harper signed with the Philadelphia Phillies for 13 years/$300 million before Mike Trout’s extension on March 19th.

This trend sends a clear message: pay your young superstars right now, because they will only cost more money the more you wait. At age 26 and with two years remaining on his rookie contract, reigning MVP and World Series champion outfielder Mookie Betts may look to cash in now while the player comparisons are locked in.

For the past three seasons, Mookie Betts has been in the conversation as one of baseball’s greatest young superstars with an impact in nearly every category of the game.  Now that Mookie Betts proved himself as an MVP and the cornerstone of a championship Red Sox team, Dave Dombrowski and the Red Sox have to prepare to keep Mookie locked in with the Red Sox for the remainder of Mookie’s hopefully long and illustrious career.

The $1.3 billion dollars in combined money promised to Nolan Arenado, Bryce Harper, Manny Machado and now Bryce Harper has revitalized the argument against lengthy guaranteed contracts in baseball, but the production of players like Mookie Betts at this current time already justify the cost of a decrease in production as the player ages.

The 10 year/$252 million dollar deal signed by now-retired Alex Rodriguez with the Texas Rangers back in 2000 is known as the mega deal by which all mega deals will be judged. Over the original length of this contract, Rodriguez won multiple MVP awards and was undoubtedly one of the best players in the game for the length of the contract, with some help from steroids of course.

However, Rodriguez opted out of this deal in 2007 to sign for another 10 year/$275 million dollar contract with the Yankees. While Rodriguez was no longer the same player by 2013 due to another steroid suspension and increasing age, the contract was overall a success, as Rodriguez was a key contributor to New York’s 2009 team.

The Rodriguez contract teaches that to keep a superstar for their best years, there has to be give-and-take as long as what the superstar gives during his prime years is enough to make the decrease in production toward the end of the contract acceptable.

For players like Bryce Harper, Manny Machado and even Mike Trout who have new deals in 2019, it is difficult to tell what player they will be in ten years. However, for their production right now was enough to make the ten-year question at least worth asking.

On Tuesday, 26 year-old Mookie Betts was asked what he wants in a new contract by reporters. Betts declined an extension offered to him by the Red Sox in Fall 2017, and has played himself into a better contract than he would have received then, with an MVP and World Series trophy in 2018.

Mookie’s answer: a contract that fits his “value”. While he is one of baseball’s most humble personalities, and never one to focus on himself, he (or his agent Scott Boras) also recognizes this great opportunity to set his future straight.

Mookie made $20 million in 2018 after settling in arbitration court with the Red Sox, and was making far less since his promotion to the major leagues in 2014.

The Red Sox are set on keeping Mookie Betts in Boston for the rest of Mookie’s career, but the Red Sox will have to meet Mookie at a price that is worth being the last contract Mookie receives as a player in the major leagues.

Betts is not a free agent until after 2020, but the more Boston waits, the price is likely to go up until then. Not to mention, other key players such as Xander Bogaerts and Chris Sale will be up for extensions before that time. Since Boston is likely saving for those future extensions, players such as Craig Kimbrel are likely not returning to the Red Sox in 2019. It’s safe to assume the Red Sox are prepared for the future, hopefully one that includes Mookie Betts. 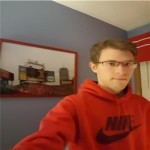 Tom Brady posted a blank silhouette picture of himself stepping out of the gates at Gillette Stadium the day before Super Bowl 54, a preview for his promotional ad with Hulu that ended with, “I’m not going anywhere”.  At the conclusion of the Super Bowl, New England has one month to negotiate with Tom Brady […]