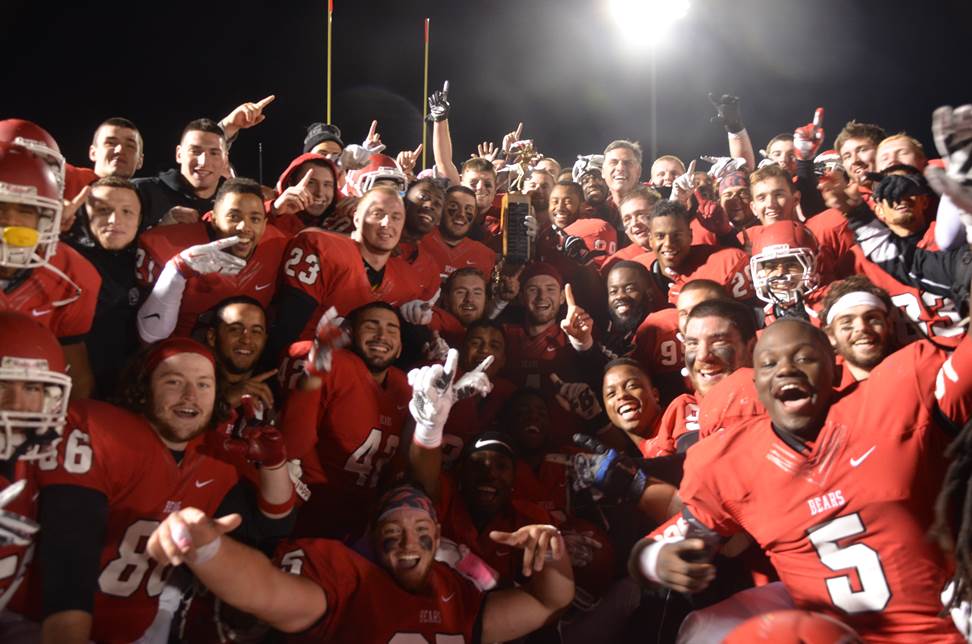 After finishing with a losing record of 4-6 last season, Bridgewater State University (BSU) football undoubtedly turned things around in the 2015 season. Their recent homecoming victory marks four straight wins for the Bears and they now have a record of 6-2 overall, including 5-1 in the MASCAC.

Senior running back Carlton Williamson, who has amassed a total of 602 yards with 3 touchdowns this season, prior to the game, discussed what the team has to do to continue to come out victorious.

“Our offense can improve by remaining focused and continuing to execute,” said Williamson, “Everyone just has to do their job and play mistake free.”

With the 48-20 victory against Westfield State University last Saturday, one can evidently say that the team executed and did their job.

BSU students, alumni, and community gathered the stands at Swenson Field to watch the Bears take on the Westfield State University Owls during the prominent first evening homecoming game. The team has made it a routine to come out on top during homecoming, and this year they certainly met those expectations.

During the first half, the offense played with precision and without mistake racking up a total of 28 points. The Bears defense left Westfield scoreless until the third quarter and limited the Owls to a mere 35 rushing yards.

The Bears went into the locker room during halftime up by four touchdowns. The fans were entertained with halftime festivities, including announcements of the winners of student group competitions that took place during the eventful homecoming day.

Sophomore quarterback Alex McLaughlin started the second half with a 13 yard rushing touchdown gathering six more points for the Bears. McLaughlin had an outstanding game, accumulating 164 rushing yards with four touchdowns on the ground.

The Owls offense finally came out to play during the second half with two touchdowns in the third quarter and one more in the fourth. However, the Bears offense matched them with touchdowns giving BSU the 48-20 victory.

The Bears offense played efficient all around gathering a season-high 356 rushing yards, with 499 offensive yards altogether.

Before the game, I had the chance to talk to the co-offensive coordinator of the BSU football team, Patrick Callahan. Callahan has been part of the BSU coaching staff for over ten years and explained his admiration for BSU football.

“I have been here for a long time. I absolutely love it. The student athletes and the coaches are the reason I do it. It’s a great place to be and a big part of my life,” said coach Callahan, “The offense has changed over the years, but we still run some of the same concepts that we did with coach Maz. The thing that hasn’t changed is the hard work the team and the coaching staff puts in every day.”

BSU football can gather some well-deserved rest in this upcoming bye week. The team and fans alike hope to continue this streak at the Bears home, Swenson Field, on Saturday, Nov. 7 at 12:00 p.m. against Framingham St.

Andrew Higginbottom is a Staff Writer for The Comment newspaper.