There’s a professional sports phenomenon that I like to call the “championship tax”: any player that’s part of a championship team gains significant interest when they are free agents the next year. This makes it difficult for championship teams to keep their roster the same for the next season.

That applies not only to major players from the championship, but across the board and even to veterans who barely played in the postseason.

To other teams, especially ones that are down on their luck, the “championship pedigree” is thought to be a key to future success. It is thought by other teams that the players may have some secrets to winning and important lessons to teach.

This happens every year all across the four major sports. Last year, the Astros won the World Series lost veteran left field Nori Aoki to the Blue Jays and veteran center fielder Cameron Maybin to the Marlins in free agency.

Note that neither of these players were important to the stat sheet for Houston’s title run, but the championship helped improve these players’ markets.

The teams that signed Aoki and Maybin, the Blue Jays and Marlins, were destined by experts for last place. The hope and logic in these signings was that these players would assist in developing the young players so that they can improve.

It’s not just bad teams that want a piece of the championship pie, though.

The Red Sox fired manager John Farrell after two straight playoff exits and were in need of new leadership for a contending team.

They looked to Astros bench coach Alex Cora for his accountability, attention to new-age analytics, leadership skills and his ability to communicate and relate with Boston’s Spanish-speaking players.

The Red Sox had an in with Cora since he was on Boston’s 2007 World Series team and was unafraid of criticism from the vicious Boston media as a player.

The rest was history, and now the Red Sox are entering the same position as Houston was a year before, World Champions. The offseason can make or break a repeat, and no team has repeated since the New York Yankees in 1998,1999, and 2000.

The Astros attempted to extend their championship window by trading for ace pitcher Gerrit Cole, but the Red Sox have not the prospects or financial room for another big trade. These Red Sox will probably extend their own important players to extensions before attempting another trade.

The 2018 Red Sox have eight free agents from their current 40-man roster. Let’s discuss them.

The 37 year-old second baseman will be remembered for his errant throw in Game 3 of the World Series, but he did his defensive job at second base as a late-season pickup from the Angels.

The veteran is not needed with Dustin Pedroia returning in 2019 from knee surgery, but the Red Sox may choose to keep him as a backup in case Pedroia’s unusual surgery does not get him back to playing shape.

If not, a struggling team may want Kinsler as a “clubhouse guy” and a stopgap second baseman until a young team’s infield prospects are ready to start. Kinsler’s $11 million salary is too much for the Red Sox with Pedroia also making around $18 million, so he would have to take a significant pay cut to stay.

President of baseball operations Dave Dombrowski and the Red Sox are likely cutting costs in preparation for Mookie Betts and Xander Bogaerts’ contract extensions, so the 31 year-old is a possible odd man out.

Without Kimbrel, Drew Pomeranz and Hanley Ramirez’s contracts, the Red Sox are about $40 million under the luxury tax with extensions for top players looming.

Kimbrel rejected Boston’s qualifying offer for 2019 as expected, so Kimbrel is officially a free agent.

Kimbrel was shaky especially in the postseason, but his 100 mph fastball is well-equipped for Boston’s bullpen. An improving team with the free money to spend on bullpen relief, such as the Philadelphia Phillies or Atlanta Braves, should be interested in his services.

Joe Kelly is also a free agent this season after a solid 2018 campaign. While his pitch control is not consistent, Kelly’s stuff proved effective in the postseason. It also makes him a natural fit for the closer job, though closers are not meant to struggle with control.

Kelly’s market appears smaller than Kimbrel’s since Kimbrel has years of experience as an elite closer, but Kelly is another reliever with potential league interest.

Kelly earned $3.8 million in 2018, but he can easily double or even triple his money this offseason.

Pomeranz and his 2018 salary of $8 million appears to be an easy decision for the Red Sox. He missed most of 2018 with a flexor sprain, then left biceps tendinitis, then neck pain while on the disabled list. His arm is not a safe gamble either, and with the 2019 pitching rotation nearly set in stone, Pomeranz is expendable at this point in time.

Pomeranz figures to lose money in free agency because of his health concerns, so the Red Sox may let him go unless he takes a pay cut.

The World Series hero gets to turn his postseason success into another contract. The Red Sox have Mitch Moreland at first base, but they can use Steve Pearce as a serviceable backup.

The Red Sox may not fight to keep Pearce but it is a possibility that 36 year-old stays in Boston. After all, he already won over this fanbase. He made $6.25 million this season and figures to make as much if not more.

Eovaldi gave Boston the entirety of his arm this postseason but at age 29 and possibly the best free agent pitcher, he is about to be a wealthy man.

Eovaldi has gone on sports radio and interviews to express his interest in staying, but the MLB teams in need of a pitcher can and will offer much more than Boston. All the same, Eovaldi would make a solid third or fourth starter if Boston can convince him to take less.

Since throwing his glove to put himself on the disabled list for a shoulder impingement, Carson Smith seems like another unfavorable bet for good health. Smith missed 2016 and 2017 with Tommy John surgery and was not his past self when he did return from the disabled list.

He was most effective in 2015 with the Seattle Mariners, but he is a shell of his past self now. Other teams may still see potential in Smith and offer him a spot to prove himself in a new place.

The Red Sox may let him go or offer a one-year “prove it” deal at best.

“Dat Dude” and his walkoff home run to complete a 9-1 comeback win over Atlanta will be remembered, but now that Dustin Pedroia is set to return to second base, the 38 year-old may not be needed. His veteran presence is one that MLB teams appreciate, so he may earn another spring training tryout.

The Red Sox have money to spend now, but they need a plan for extending Mookie Betts and Xander Bogaerts. This may mean losing out on Craig Kimbrel, but that’s a small price to pay to have the current core of players for the foreseeable future. Mookie Betts has two more years of arbitration left before he is a free agent in 2021, and the Red Sox cannot let Betts hit free agency.

As for Xander Bogaerts, he is hitting his third and final arbitration before hitting free agency in 2020. The Red Sox also have a choice to make in keeping ace pitcher Chris Sale, who is also a free agent in 2020.

Pitcher Rick Porcello is also in need of a new contract in the near future if the Red Sox hope to turn their World Series into a dynasty. Free agency does not ramp up until December at least, so the Red Sox have plenty of time to plan for the future. Considering the free agent freeze last winter, there could still be free agents by March again.

This offseason could decide whether the Red Sox repeat as World Series champions, so the front office needs to stay focused.

Brian Garland is the Sports Editor for The Comment. 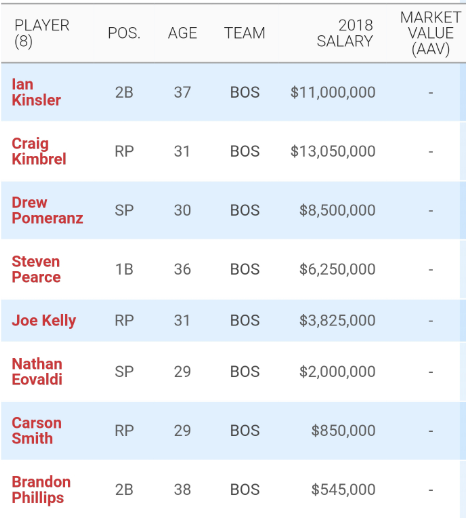 + posts
VIEW ALL POSTS BY

Over the past few decades, there has been a steady increase in mass shootings across the nation, leaving many in shock. The Washington Post defines a mass shooting as an incident “where four or more people, not including the shooter, are injured or killed.” Some of the most recent shootings from this year include the […]