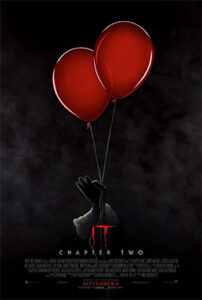 I am not a person who sees horror movies in their theatrical runs. The silent atmosphere of movie theatres and jump-scares don’t mix well with me, but It: Chapter 2 is an exception. I enjoyed the first installment of New Line Cinema’s cinematic adaptation of the iconic horror novel by Stephen King, and I was excited for this sequel. This is one of the few sequels that didn’t disappoint and actually improved on the original.

Something I was really looking forward to in It: Chapter 2 was more character development with the protagonists, The Losers Club, and that was delivered in spades. I also really enjoyed the acting in this. Bill Hader, Jessica Chastain, James McAvoy, Jay Ryan, Isaiah Mustafa, James Ransone, and Andy Bean were fantastic as the all grown up members of The Losers Club. I wouldn’t be surprised if any of the aforementioned performances are nominated during awards season. The last big thing I enjoyed that I want to mention is the movie’s use of music. The score, composed by Benjamin Wallfisch, is effective in creating a horrifying atmosphere.

With this being said, the movie is not without its flaws. The running time is quite long at 2 hours and 49 minutes, and it is very noticeable. Next, there is an overuse of obvious CGI, which I found cheesy. Other than these things and some minor nitpicks I have, there aren’t any other problems I can find with the film.

Overall, It: Chapter 2 is one of my favorite movies of 2019. I was completely sucked into the story of six outcasts dealing with the manifestation of their real-world issues because of the wonderful performances, beautiful score, and the other creative choices that were made. If you only see one sequel in your life, It: Chapter 2 is one you can’t miss.