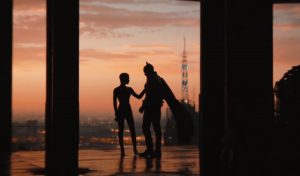 Throughout Batman’s onscreen history, we’ve seemingly explored every angle the character has.

From the goofy surrealism of Adam West-era Batman, to Gothic camp of Tim Burton’s Batman,  and then the maximalist circus of Joel Schumacher’s Batman, ending with the gritty realism of Christopher Nolan’s Batman, the film history of the Dark Knight is full of experimentation and transformation that’s shaped the legacy of this character into one that is deeply debated based on your own preferences.

All that’s missing is a Lego version!

ANYWAYS…despite the heavy burden of creating a new Bat worthy of the character’s versatile history, at the heart of Matt Reeves’ The Batman is a vision that is genuinely unique, making this movie’s existence not only justified, but very welcome.

Robert Pattinson is our Batman, but, only two years into his crime-fighting double-life, he introduces himself simply as Vengeance. We see him team up with Commissioner Jim Gordon (Jeffrey Wright) in pursuit of a mysterious killer who’s been taking down corrupt government officials in Gotham City, leaving behind ominous riddles hinting at his greater agenda. During his journey, Vengeance crosses paths with mysterious cat burglar Selina Kyle (Zoë Kravitz), powerful mob henchmen the Penguin (Colin Farell), and, eventually, the man behind it all who refers to himself as the Riddler (Paul Dano).

One of the main differences between Reeves’ vision and Nolan’s is that, while Reeves’ film is undeniably dark and poses a higher stress on realism, there is a novel shade of highly-stylized melodrama with (figuratively) colorful visuals that really grant the movie a distinct personality that Nolan’s films do not possess. When it comes to the character work, the film adopts a minimal, intimate approach to keep things grounded. When it comes to the aesthetic and action sequences, the film goes all-out and relishes in the style and mood of its lavish neo-noir depiction of Batman’s world.

Reeves performs a bit of a balancing act here, as his movie boasts an atmosphere of darkness and despair, yet still emphasizes the themes of earnestness and hope. This is the most despicable Gotham City so far, yet, at the end of this story we learn the beautiful duality between vengeance and heroism.

Vengeful people seek to hurt those who have hurt others. Heroes aim to assist those who have been hurt – a mission which takes precedence over getting even with the villains of the world.

That is the lesson this Batman needed to learn, and it’s one that we’d all be wise to remember. With that, Reeves executes another profound contradiction: The Batman is among the more faithful depictions of what this character is all about, while also making you feel as if you’re seeing him for the first time.