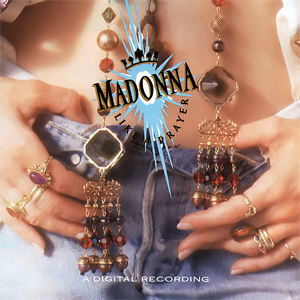 On March 21st, 1989 music icon Madonna released what many consider to be her most influential album to date, Like a Prayer. Though let’s be honest, it’s unlikely for her to put out anything more influential at this point. But it’s not like she needs to anyway. Selling 15 million albums worldwide and receiving quadruple platinum status in the United States, with religious and familial influence, let’s look track-by-track at this career-defining effort by the undisputed Queen of Pop.

Like a Prayer: A classic, obviously and her second hit involving a simile. If you get nothing out of this song, you are in serious need of prayer. And while Madonna shows some great vocals, the “power” that I’m feeling in the “midnight hour” is really coming from the background chorus. Without them, this song truly wouldn’t have had the same impact.

Express Yourself: In the past when I heard this song it had much more of a “Vogue”-feel. The one found on this album is far more horn-heavy. Sure, the message still comes across, and it’s an important one at that. However, there’s just less oomph here. Less expression, if you will.

Love Song (with Prince): I mean what a collab. In addition to providing vocals for this song, Prince actually played guitar on “Like a Prayer” along with the not yet mentioned “Keep It Together” and “Act of Contrition”. Prince’s funk is always appreciated, and this duet is no exception. Madonna ends the song singing “This is not a love song I want to sing” and I have to agree. I just want to let this 80s culture clash take me on this journey in peace.

Till Death Do Us Part: As great as the last song was, it was also on the slow side and it’s far too early in the album for it to stay that way. And so, this is a nice picker upper (not talking Bounty here). If I was a teenage girl living in the late 80s/early 90s this would be the song I blast in my car as I trek to the mall with my so-called friends who are totally jealous of Brandon and I.

Promise to Try: One of her more emotional efforts, she surely tries here but it just doesn’t do it for me. Probably still riding off of the nostalgia high that the last song provided. It may have been better suited for later in the album.

Cherish: One word to describe this song? Bouncy. All I can focus on here is this catchy beat. And that’s pretty ironic when you look at the lyric “So don’t underestimate my point of view”. What is it again? I don’t know. She says something about Romeo and Juliet. Bounce bounce bounce.

Dear Jessie: Synth is an 80s staple, of course, but this song goes from royal strings to western twang and it works so well especially as a contrast to that ever-present synth found elsewhere. With the current news cycle that revolves around, believe it or not, Aunt Becky from Full House and actor Jussie Smollett (formerly) of Empire this song is ripe for a parody.

Oh Father: A nice transition is made between this song and the previous. Another serious effort, Madonna is far more successful here. Even without the somber piano and slow strings, one can really feel the emotional strain in her voice. Her vulnerability here provides the impression that you are a priest who she is confessing to, only a thin piece of patterned metal separating the two of you.

Keep It Together: This song starts out sounding like a sweeping broom, but it oddly works? The funk has returned, and the congregation has been released. I actually heard this song for the first time at a Taco Bell, and keep it together my intestines could not.

Pray for Spanish Eyes: Sorry, I was weirded out by this one. Different generation, I guess. I don’t know what it is but the title alone reminds me of a white woman telling a woman of color they wish they had their “tan” and asking to touch their hair. The latin influence is great here, I just wish it wasn’t done by her.

Act of Contrition: Prince really lays into the guitar here and it’s the only noteworthy thing as every other element is essentially a rehash of the rest of the album. This is by no means a standalone song you could listen to unless you’re looking for the musical equivalent of getting thumped by a Bible.

So, there you have it. Yes, this album is 30 years old and both Madonna and you the reader could probably do without this review. But when it comes to the 1980s, just like a prayer you know I’ll take you there.