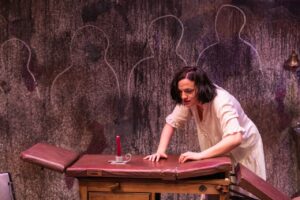 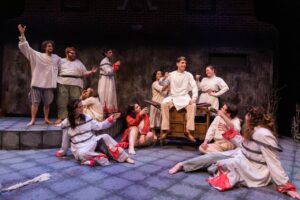 Something wicked this way comes…and goes! B.S.U.’s production of Macbeth has finished up, leaving many viewers with some serious goosebumps to last them a while. I had the privilege of seeing the Thursday show, and let me tell you, it kept me on the edge of my seat throughout.

Now, I’ll be the first to admit that Macbeth is nowhere near my favorite Shakespearean play, and normally I find myself so bored that I wish to meet the same fate as the late King Duncan. But immediately upon entering the theater, it was obvious this would be a different kind of performance. Firstly, the audience was seated on the stage with elements of theater-in-the-round.

In an earlier interview with the director of the play, Professor Katherine Alix-Gaudreau, it was explained that this was to immerse the audience in the show, allowing the actors to mingle with the audience. And she did not lie! As the audience filtered in, people in long white gowns would come and sit among them, generally staring intently at or ignoring the shocked play-goers.

While the play is normally set in Scotland, this version was set in an insane asylum, placing the play at a whole new level. The actors were able to flawlessly transition from patient to character, while still keeping their elements crazy present. From stroking their hair, to uncontrollable laughter, these actors definitely captured the essence of insanity.

Keeping in mind that no production is absolutely perfect, there were some mistakes. However they were so minor that they barely took any attention away from the show as a whole. The actors all knew their lines except for a few very small slip-ups in the form of stumbled sentences. The only other thing that was flawed was the volume of the music. While it was a welcome addition to the normally unaccompanied show, the music overpowered the actors and their lines, but only on two occasions and it was a ten second long type of situation.

I would have to say that my favorite part of the whole show was the witches. They were both equal parts creepy and eye-catching. I was always looking for how they would try to insert themselves into the scene that was going on, regardless of whether they had lines. It was a very good show, and I can say with complete honesty that I cannot wait to see what comes next for both the actors and director.