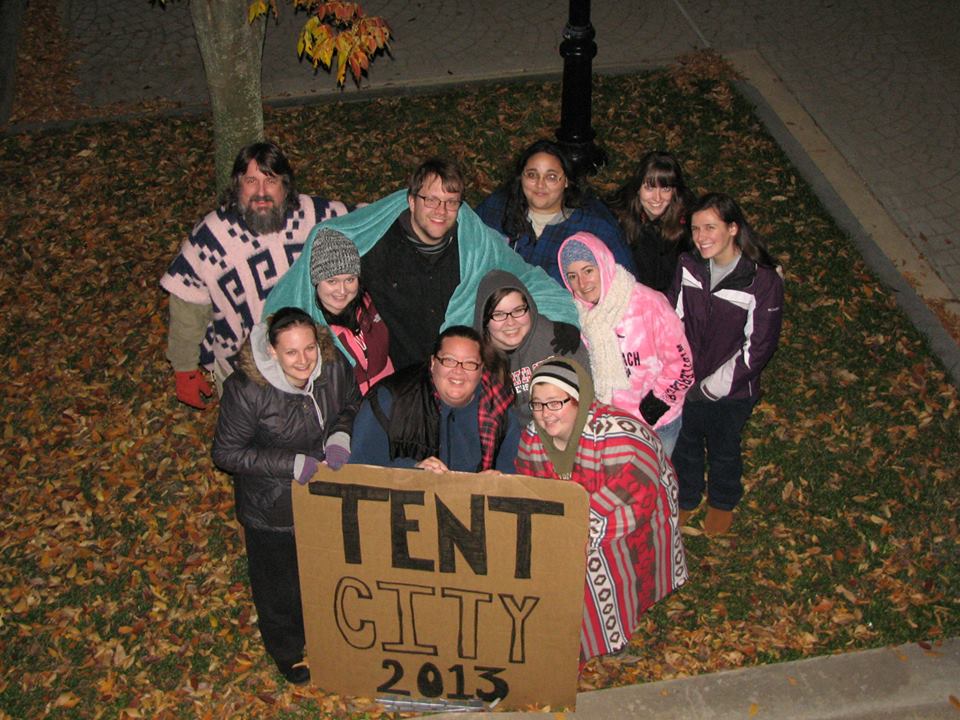 You may complain about the dorms at school, how uncomfortable the beds are, how small the rooms are, how annoying the chairs are, but it’s better than the sidewalk, or a cardboard box.
Tent City is an event put on by the Bridgewater State University’s Social Justice League every year during Hunger and Homelessness Awareness Week (Nov. 17 -21). It is a simulation of homelessness and gives students a chance to experience it firsthand.
“[Tent City] raises awareness of the daily struggles of people experiencing homelessness,” Senior Sociology and Economics major Jared Costigan said. “It brings it to a more realistic level.”
“Students are given the opportunity to sleep out in the RCC Fountain areas in tents or even on the benches, to get a full feel of living on the streets,” senior sociology major Victoria Hordern said. “Some students take it even further and leave all electronics at home, and use the library and Kelly Gym locker rooms.”
As the President and Vice President of the Social Justice League, Costigan and Hordern help organize Tent City. There are speakers every night that lead to a discussion about issues surrounding homelessness and specific causes. Bridgewater State alumna Melissa Braden spoke on Nov. 19 about Habitat for Humanity in Worcester, where she currently works.
On Nov. 20, alumnus Brandon Reynolds spoke of Father Bill’s homeless shelter, where he is heavily involved, and brought a resident and friend to share his personal story. “We talked about couch surfing as a form of homelessness,” Costigan said. “People won’t admit they are homeless. They have a lot of pride and refuse to go into shelters. They’d rather live on the street.”
They shone a light on a part of the homeless population that is usually hidden: college students. Costigan emphasized that students who were accepted into college and once had the financial means to pay for it, can suddenly be faced with a devastating change in lifestyle.
“Having these events on campus is very important because it brings about awareness of our world,” Hordern said. “College students can become absorbed in the world of college life, and it can be hard to educate people on a topic that may not hit home for them. When a student can actually experience it, that’s when they understand the severity of the issue.”
We can be quick to judge, and are conditioned to look down on those experiencing homelessness. “Stigmatization of this population is something we’re raised with,” Costigan said. “People think they are all drug addicts, when approximately only 40% are. That means 60% aren’t. There are systematic causes of this, it’s not the person’s fault.”
“When you first see someone [that is homeless], your first reaction is what you are conditioned to think. The second reaction is what you think and your value systems. Then you react with more knowledge and understanding.” Both Hordern and Costigan recommend others participate in Tent City and similar events.
Even though Tent City is over, there are numerous ways students can still get involved in the fight against homelessness and hunger. According to Costigan, the Community Service Center hosts trips once or twice monthly to Father Bill’s in Brockton, with food provided by Sodexo. Students can sign up online in order to attend.
The new BSU Food Bank located in RCC is always accepting donations. The Social Justice League is a great resource for students looking to get involved. They meet every Thursday in the Burrill Office Complex at 5p.m. Other clubs on campus that focus on social justice issues include: Free the Children, Mentors for Friends, Mentors for Change, and many others.
Costigan leaves you with an important message, “Challenge yourself to have a conversation with someone experiencing homelessness before you place them in a box.”